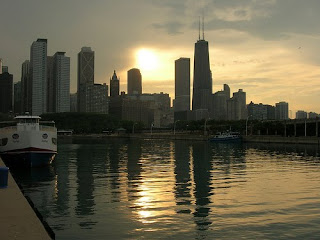 Afternoon, friends. By reading the title, you may have figured out that I believe, with no doubt in my mind, that the city of Chicago hates my stinking guts. Not just an area or a neighborhood, but the whole cotdang city. The skyline, Mayor Daley, the (whatchutalmbout) Willis Tower, Lake Michigan, deep dish pizza, the guy selling pickles and watches on the south side, Wrigleyville– the whole thing.

The last few days have been such a smörgåsbord of adventure, I’m not sure if I can even reveal it without posting more than one part. I wouldn’t want to scare you all away from me. I’ll try my best to fully immerse you in what it has been like to be me for the past few days.

Prologue:
One week ago, I applied for a job in Chicago, with a company I know quite a bit about. The job is something that I, along with others, felt was a good match for the skills I currently possess. I was excited for the opportunity, and just hoped that I would get a chance to shine and show them my awesomeness! I saw myself at the place, thriving and surviving. Fingers crossed and prayers sent up, I waited for news, hopefully of the good variety.

Monday/Tuesday:
Mondays are the days that I run the food pantry, so things were kind of hectic for me. There’s always a lot to do, and because I like to check and double check things over and over again, I hardly sit down. I left my phone around in various places when things were particularly hectic, and hadn’t realized I missed a call from the place until later that evening. Around midnight, I find a contact that lets me know that interviews were being conducted on the following day, which is likely what the call was for.

In an enthusiastic round of “jump the gun,” I begin packing, showering, and preparing myself for an impromptu day trip to the big city. Mind you, I get no sleep in the hours leading up to this. My immediate thought process was to take the first thing that could get me there, call first thing in the morning to find out when interviews were, and by that time, I should already be there. I had a friend at the ready to pick me up from the train station, and although very sleepy, I was optimistic. I didn’t sleep much, due to excitement, nervousness, and everything else. I felt with a latte about half an hour before the (yet to be determined) event, I’d be okay.

I get there, catch up with my friend, and the waiting game begins. I called, and he couldn’t reach me until later that day. As the day turned to dawn, though, some of the enthusiasm wore off, as I tried to stay a bit optimistic. I wanted to just turn around and go home, but something (and a few someones) prompted me to hold on for just another day. Hope intact, I changed my return ticket to the following afternoon, bit the bullet, and stayed another night…

Just found out a little over an hour ago that today’s my last day at this temp job… Not so miffed about the fact that it’s over, since it’s been kind of a pain. I’m more annoyed at the fact that I didn’t get notified until 3 hours before I’m supposed to go…

Office politics baffle me sometimes. Common courtesy goes out the window in favor of big egos and such sometimes.

I’ll have a bunch to talk about later, so don’t be surprised if I’m back after this long day with my big comfy couch. 🙁

…time to fire up the old Unemployment Chronicles again.

I’m really not a bad person. I saw an engagement today after Bible study and didn’t cry! Actually, I had a bit of dust in my eye, but the secret gangster in me I decided to high five people instead of openly sob. I believe they’ll have a great marriage. I just honestly haven’t had the time to give a decent update in recent days. In between packing and whatnot, I got a call to temp full time for a while at the University, which started today. That left me the weekend to begin picking up the broken pieces of my heart packing, though I’m still in denial that I even have to do it… I kind of feel like the kids in Recess, from this episode.

I…shall not, I shall not be moved. I… shall not, I shall not be moved.
Apartment 301 has become my Old Rusty. My refuge when I was sick, and my hideaway when I didn’t want to be bothered. It was my home for 3 years, and heck, it felt nice to call one place home for so long… Moving around so much when I was younger left me with some kind of thing with stability. Although sometimes I couldn’t stand being here as witnessed by my weekly rants of “I can’t stand this forkin’ house!!!” I guess I’ve placed more emphasis on this than I thought I had, and it’s really just hitting me now. I’m actually feeling homesick for a place that wasn’t technically a home. For me, home’s always been “where your stuff is.” Now, home’s where my stuff and heart fight for the extra bedroom space, and I’ll miss it. 🙂

I’m sure I’ll be okay without my Old Rusty. And even when I miss it, I’ll still have the memories.

Off to bed, my sleep schedule is also forked.