Okay, folks. Here’s part two of the “Chicago Hates My Stinking Guts, and I (don’t) Have the T-Shirt to Prove It” series. This is the fun part, where I can integrate the tweets into it!  Part 1 can be found here.


We last left off on me sucking it in, and gambling another train ride, hoping to have gotten the call I was looking forward to. I waited, hoped, and prayed for a call, and when I didn’t get one, I called myself. The person I was needing to talk to was in a meeting, and would get back to me in a few hours. With that confirmation, I prepared myself to take the late afternoon train home.


Packed and ready to go, I spruced myself up in the mirror in order to hide my (obvious) disappointment in how things had played out. I untwisted my twists, threw on a bit of eyeliner and lip gloss with my sweats, and proceeded to make faces in the mirror. It helped me blow off a bit of steam from the experience, and gave me the mindset of “if you’re gonna face the world, at least be semi-cute while doing it.” This one, coined by my buddy Gem, was called my “deez face.” 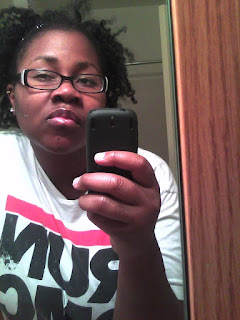 Blog deez.
Anyway, my friend retrieves me to return me to the train station, but there’s a bit of a change in plans, instead of dropping me off at the train station due to family responsibilities (which I already knew about and was totally cool with), he would drop me off at the train station, where I would be able to catch downtown and get to the train station on time.
I purchase the transit card, and right off the bat, I have problems- I couldn’t even figure out how my card fit in the darn thing to get to the platform! Luckily, the attendant helped me, and didn’t laugh in my face about it. He even helped me carry my bag over the turnstile. Thank you, kind gentleman. Sadly, a train passed me while trying to figure that whole situation out, so I immediately got antsy. **iTweet: Think I just missed a train. Lovely. Lemme chug this fanta.**

I could see the oncoming train RIGHT DOWN THE TRACK, but it wouldn’t move. I’m wondering if this is normal, and if I’ll even get to where I need to be on time. I think this is when it finally hits me: I don’t know how to navigate this city- I’m not from here! **iTweet: 1-WHERE THE FOCK IS THIS TRAIN?! 2-Eff it, I’m walking downtown. Which way is that again, Google? 3-The train is down there. I can see it. It just won’t move. Why won’t you move?**


Eventually, I look at the map I pilfered from the stop like a tourist, and realize the stop that I’m supposed to get off at does not exist on the line I’m currently on. **iTweet: <<— Freaking the frick out** A few text messages later, I find out where I’m supposed to get off at next, but I miss that stop from trying not to cry on the subway. Pulling my wits together again, I employ Google Maps (now with GPS!) on my phone, and reroute myself. I get off where it tells me to, but I can’t figure out where I’m supposed to transfer to the other line. After walking around the platform aimlessly, I decide to try and make a walk for it. To Union Station. In downtown Chicago. By myself. With no help. Did I mention how I hadn’t had much sleep leading up to this?


Anyway, I’m following the flashing blue dot (that’s supposed to be me), and realize I’m going in the OPPOSITE direction of where I’m supposed to be. My semi-tired kind of mind tells me that my GPS was picking me up about a block or two from my actual current location, so I just start to walk and go with it… **iTweet: WHERE THE FOCK AM I?!?** I passed a lot of buildings, big and small. Most of them, I cannot even remember at that point, because I had about 15 minutes to get to a location that I didn’t even know! I passed the (whatchutalmbow) Willis Tower, and since Mission Beez was out to play, Touristy Picture Taking Beez could not take her place. I walked across a bridge where there was a river, whimpering the whole way. Those who know me, know that I don’t walk over things I can see through. But I had to put fear aside in order to catch the train.


At that point, all I remembered was the intersection I was looking for while finding the station. I saw the intersection, but I didn’t see the station. Guess it didn’t really help that I didn’t know what it looked like. **iTweet: *throws phone in the gahtdamb river* Why come I can’t find the gahtdamb AMTRAK?!?** I walked around this same area about three times, from 5 different angles, only to realize that I had indeed walked past the station multiple times by now. I get in, follow the directions to the ticketing gate, accepting that I was 20 minutes past departure and just wanting to book for the next train. The surly ticket agent informs me that the later train is sold out, making me stuck there until the following morning. Again, I had to plug my tear ducts. **iTweet: 1- I’m gonna cry. 2- Chicago hates me. I’m convinced.**


I realize it is well into the evening, and I had not eaten all day, so while in search of an eatery, the brain gears start working again, as I figure out how to spend (yet) another night in Chicago, when all I wanted to do is be back at my home…


Part 3 will hopefully be the last one. Hopefully.