Well, world, after seeing a rapid influx of chicken promotions from places besides Church’s (where you could ALWAYS get a meal that fed a family of 4 for 2 nights at $2.99), I am maybe one of the few that wonder- what chickens are they using? Where did they get so many from, to offer promotion after promotion? Most importantly, what are they putting in it to make people so darn crazy about it?!?

“You mean to tell me we can’t feed our kids?”
-Well, Beez sez with that 5 bucks you could get a pack of drumsticks from the store, season it to your own level of perfection, cook it yourself, buy some fruit for dessert, and still have change. Said children will still be fed– and they bet’ be happy.

“That’s false advertisement!”
“Two weeks ago they didn’t have the special either.”
“That’s ok, we’ll go to KFC!”

-I’m not an expert on media, but what did you notice about those videos? I mean, besides the horrible puns such as “crying fowl” and laughing reporters? Yeah, you saw it.

Exhibit 3 (yeah, I know I started with letters) 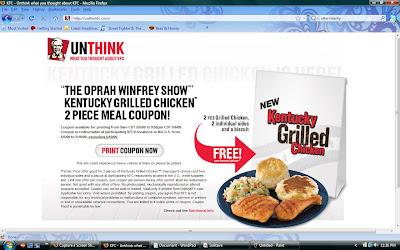 Note: No dignity necessary to redeem.
Alas, Beez got curious after an influx of facebook statuses to the effect of “Oprah shole’ got a big heart- she givin’ out free chicken, y’all!” , I stumbled upon this website, offering 2 pieces of fresh out the microwave grilled Kentucky Grilled Chicken, with two sides and a biscuit- a $3.99 value- take that Popeye’s! Y’all can’t even keep a tractor trailer in the back with chicken on ice- now the Colonel (R.I.P) has teamed with the most powerful force in the world, the Oprah (formerly known as Orpah) of Harpo Studios, who can rapidly change consumer habits, and “has the power to lay waste an entire industry with a mere utterance.”*

After deciding with the partner in crime (who will not be named due to Beez not getting her waiver out on time-blast!), that we would indeed taste and see if the chicken was grilled, and as a side note, good. The line was going pretty fast, but a woman who entered after us was more than excited for this deal. Among her shenanigans:
She asked a worker there, “Were y’all ready for this?”
Poor confused chicken boy: *shrugs shoulders*
Happy chicken lady: “Well, y’all shoulda been prepared! We ready to eat!”

As she got ready to order: “If you don’t have grilled chicken, I’ll take fried. I just want chicken!”

After our number was called, we bolted for the car, giggling like we stole something.

The verdict: Tastes baked. Or rotisseried. Whatever. It was free. Have fun!

In other news, I bought a Bible. Now I can learn how to be a work in progress (instead of just working on it.)

Next up: The cheap, cloned chicken theory (subtitled: How do you get such big pieces from Church’s for 50 cents?)
–Beez
*Gin Rummy, The Boondocks